The release of the Sky Event API brings the vision of personal event networks closer to reality on the Kynetx platform. Sky uses saliance data--information saying which rulesets are listening to which events--to determine the rulesets that see any given event. 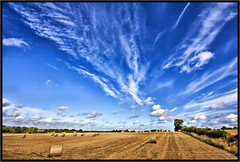 The release of the Sky API brings the vision of personal event networks closer to reality on the Kynetx platform. Our previous event API, Blue, required that the ruleset IDs be specified, Sky does not. Rather Sky uses saliance data--information saying which rulesets are listening to which events--to determine the rulesets that see any given event. Of course, this is done on an entity-by-entity basis, making it personal. You will have activated a different collection of rulesets than I and therefore an event raised on your behalf will fire different rules than an event raised for me--automatically. Sky is compatible with the Evented API specification.

For now, most KRL programmers won't notice any difference since the Blue API is still supported and most endpoints are still using it. However, as endpoints--particularly KBX--begin using Sky, all kinds of new behaviors will open up. I'll have an example up on this blog in a few days.

There are several changes to default behavior that will take place immediately, regardless of endpoint, and could affect your KRL rulesets if you're made heavy use of explicit events.

The first change affects what rulesets see an explicit event. Previously, if you didn't specify a ruleset in the raise statement in the rule postlude, the explicit event was only seen by the current ruleset. With this release, an explicit event that does not specify the ruleset will be seen by any ruleset that the user has activated if saliance data indicates that it listens for that event.

For most developers and apps, this won't be a problem because even if you use explicit events, you've likely used different event names in different rulesets. However, if you experience problems, there is a work around. You've always been able to specify the rulesets for which an explicit event is being raised. You can specify the current ruleset using the Meta library to retrieve it's ruleset ID like so:

Of course, you don't need to use the Meta library, you could set the version in a configuration module and then just use that value in constructing the target RID.

I'm very excited about Sky because it opens up new possibilities for creating personal event systems. Watch for a blog post in a few days that shows why this is so.