Web Science: Do We Need a New Discipline?

I'm in a panel at WWW2007 on Web Science, essentially a proposal for a new discipline. The field would be interdisciplinary, taking things from areas as diverse as sociology, physics, biology, law, and psychology, as well as the areas you might immediately think of like computer science or math.

What is Web Science? Here's a quote from a Science paper on Web Science:

When we discuss an agenda for a science of the Web, we use the term "science" in two ways. Physical and biological science analyzes the natural world, and tries to find microscopic laws that, extrapolated to the macroscopic realm, would generate the behavior observed. Computer science, by contrast, though partly analytic, is principally synthetic: It is concerned with the construction of new languages and algorithms in order to produce novel desired computer behaviors. Web science is a combination of these two features. The Web is an engineered space created through formally specified languages and protocols. However, because humans are the creators of Web pages and links between them, their interactions form emergent patterns in the Web at a macroscopic scale. These human interactions are, in turn, governed by social conventions and laws. Web science, therefore, must be inherently interdisciplinary; its goal is to both understand the growth of the Web and to create approaches that allow new powerful and more beneficial patterns to occur.
From Creating a Science of the Web -- Berners-Lee et al. 313 (5788): 769 -- Science
Referenced Wed May 09 2007 10:46:08 GMT-0600 (MDT)

The Web Science Method, is a cycle, which Tim Berners-Lee used as an underlying framework for his talk this morning. Interestingly I can't find an example of it online. So, I drew one from a slide Danny showed: 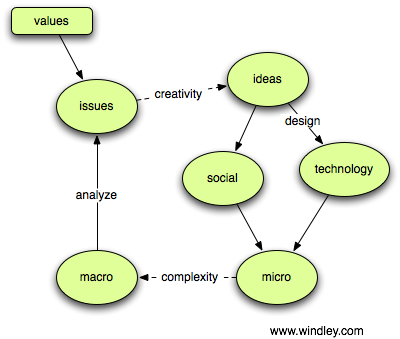 So what makes Web Science worthy of being a new discipline? That's what the panel is debating to some extent. Nigel Shadbolt from University of Southampton and Daniel Weitzner from MIT are proponents. Peter Patel-Schneider from Bell Labs is the naysayer.

Peter makes the point that if Web Science is merely a collection of informaticians with a common application area, that's not a new discipline. He is also concerned that splitting it off will fragment it from the very people who it needs most to participate.

Danny responds that the Web is more than an interesting application. It's a thing that can be studied independently of the fact that it's based on computers. Things that have worked well in computers systems in general (like PKI) have failed on the Web. It has it's own security requirements.

Nigel makes the point that names and slogans can have real force. A name can unify and give structure to a formerly unstructured activity.

The moderator, Phillip Hallam-Baker (Verisign) asks "give me an example of a falsifiable proposition from Web Science," a hallmark of a scientific inquiry. Danny responds with "P3P will solve the privacy problem," a matter with which he has some familiarity.

Nigel points out the striking difference between what students experience in the social world versus what they see in their university courses, where the Web is merely a delivery vehicle for text and, occasionally, rich media. Why isn't it part of their disciplinary study?

Someone in the audience made the remark that when you have a system used by billions of people, it's not really about technology, it's about sociology, politics, economics and law. Nigel responds that while that's true, it would be a shame if al of this developed without understanding and analyzing the technological underpinning that makes it work. That's the science.

Another audience member says that the Web isn't about computation, it's about knowledge and it's organization. That's what makes it so interdisciplinary.

Danny makes a clarification regarding fields and disciplines. He's not thinking of this as a new discipline in the sense that there's not new way of doing "law" related to the Web. The discipline of the law is unchanged. But that doesn't mean there isn't a new field here.

My own feeling, after listening to the presentations and discussion is that this is how interdisciplinary work happens--at least it's one way. We all talk about the need and desire to do interdisciplinary work, but the fact is that without some organizing principle and motivation, it doesn't happen. That organization and motivation may happen within the academy on an ad hoc basis through chance or friendship, but sometimes it happens because we choose to give it form with money, space, and organization.

To the extent we desire more interdisciplinary work to happen surround the study of the Web, identifying and, more importantly, funding it as such is important.