IT Does So Matter!

I recently wrote about a Harvard Business Review article by Nicholas Carr called Why IT Doesn't Matter Anymore. My review focused on the idea that IT commoditization brings with it an increased role for operational excellence on the part of IT staffs. An article on ComputerWorld, entitled "IT Does So Matter!" reports interviews with four CIOs and their responses to Carr's article. The focus of that article is on innovation. I love this quote from Andrew McAfee (also of Harvard Business School):

Andrew McAfee of Harvard Business School McAfee: It's a matter of whether we're talking about IT enhancing productivity or competition. The telephone has made us able to get more done in a day. Has the phone continued to radically affect the competitive balance among companies? No. That's Nick's point. Some kinds of IT fall into that category. For example, e-mail. We all have it; we all use it. But it's not competition-changing, so overinvesting in it is not a great idea. The bases of competition revolve around other things. [But] there are industries where technologies are fundamentally important. Dell has an IT business-process automation infrastructure that really works. If you don't have one of those, do you have a hope of competing in that industry? And even if you want to put one of those in place, there will be a really big difference in how successful you are vs. another company, because it's tough organizational change in a technology wrapper. We're not equally good at doing it. If we find ourselves competing in an industry where these kinds of systems are important, then IT matters like crazy. 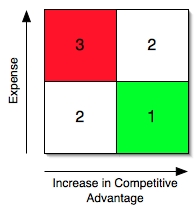 Later in the article, Paul Strassmann, acting CIO at NASA, points out that anyone could have bought a Teradata system from NCR years ago at the same time that Wal-Mart did (in fact many probably did). That didn't make them Wal-Mart. My OSCON Wrap-Up makes the point that in a world of commodity software, its what you do with it that counts and that's Strassmann's point as well.

Even though my review focused on the red zone, its important not to overlook the green zone. You'll do yourself and your business a disservice if you just assume the green zone is empty. IT managers and CIO especially have to work closely with business managers to help them see where IT can be used to change the business. That's innovative, green-zone work.