Public Service Tip No. 4: Living with the Redbilled Oxpecker

This story is part of a ongoing series of tips for those who might be entering public service. 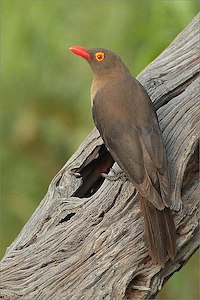 One of the interesting things about working in the Governor's Office is that any time you can't make it into work, you can catch up on the day by reading the paper. Even knowing this beforehand doesn't prepare you for the overpowering, suffocating nature of the press coverage. Even in a small state, the press hangs onto the political machine in a manner not unlike the symbiotic relationship that the redbilled oxpecker has with the rhino. The press depends on government and government is fashioned by the press.

The most important lesson to learn about the press is that they always get it wrong. I've been interviewed dozens of times by friendlies and non-friendlies alike and there have been errors of fact in every single case. I never see a single story in the newspaper or on TV anymore that I don't ask myself what the real story is. The errors are not necessarily made maliciously; the press simply doesn't usually spend enough time or have the right background to fully understand a story. This is doubly true when they're dealing with technology.

A large part of the problem is that, just like you and me, reporters have lives and they have jobs. Most of the time, their writing is just part of the job. They're assigned some story from their editor, which they don't know or care about. They have to write 1500 words before they can pick up their kid from day care and grab a pizza. So, they write 1500 words. They call a few people, get a few quotes from the old favorites and file the story. The story that's going to have significant impact on your program or even your life is, to them, just a task standing between them and Monday Night Football.

The problem is exacerbated by the fact that reporters do not live in the real world. They have little understanding of the kinds of things anyone in the private sector takes for granted. They work so closely with bureaucrats that their attitudes more closely reflect those of the government that they cover than they do the attitudes of their readers.

Much of what you see reported is gleaned from other papers. When you're on the inside looking out, its relatively easy to recognize where certain statements and information comes from. Often it comes from another story. Salt Lake has two major dailies, one in the morning and one in the afternoon. They often decide what to cover and even what angle they're going to take by reading the other one. They all quote each other's inaccuracies with regularity. Once something gets started, its impossible to correct. Work to get it right upfront.

I found reporters who I respected and liked to work with, even when they weren't writing good things about me. Invariably, these were the ones who worked hard to understand the story. There are others for whom I have little respect because the got the story wrong in spite of any effort to help them understand the facts (simple things like the org chart come to mind). I reached the conclusion that they didn't want to know the facts because that would make the writing that much more difficult or contradict with the paper's editorial position.

You may not like the press and they may not be very helpful to your agenda, but they are as much a part of the political ecosystem as the redbilled oxpecker is a part of the savannah. Learn to accept that fact, live with the mistakes and the occasional pecks, and you'll sleep better at night.